Tom Waits is one of the best songwriters of all time. If you don't believe that, you probably haven't heard songs like Hold On, I Hope That I Don't Fall In Love With You, or Jersey Girl, just to name a few of my personal favorites.

Tom Waits has a very peculiar way of delivering his storytelling.

Maybe this is due to his "second job" as an actor (remember him in Bram Stoker's Dracula?), but, to me, many of his songs almost sound like movies. While listening to his voice, singing verse after verse, I can picture vivid scenes in my head. It's just like reading a great novel or immerse myself in a beautiful film. After all, he is so great at describing even the dumbest things with the most brilliant images or metaphors.

But Tom Waits is a great storyteller even when he doesn't write songs.

Have a look at some of his interviews (there are a bunch on YouTube): you'll notice that he is just great with words, even in that context.

Going down the rabbit hole of Tom Waits' quotes on the art of songwriting, I realized how precious his advice is. So I made a little video containing songwriting tips inspired by his words (you can check it out at the bottom of the page).

For more insight on Tom Waits' songwriting process and other random thoughts, have a look at the book Tom Waits on Tom Waits, Interviews and Encounter. 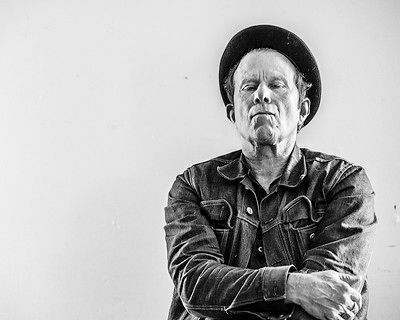 Sometimes we have a hard time finding the right lyrics to go with a certain melody or vice-versa.

In doing so, we forget that spoken language in itself is already a sound.

The other way around is also true: a melody already contains the seeds of the lyrics we are going to write.

I don't know if it ever happened to you, but when I find random melodies over random chord progressions, some lyrics come automatically. It feels like the melody is suggesting the words.

I start humming or vocalizing and then the words just come to my mind.

Most of the time, they are rubbish, but I take note of them anyway because if I can save just a couple of them, it's great. From those two or three words that randomly came to my mind and that actually work, I can start building a story or an idea or even a message.

Tip #2: Use the Frankenstein approach

Tom Waits says: "You always cannibalize songs. That’s part of the process. Frankenstein that number over there, take the head off of him and put it on to that guy immediately, keep them alive until the head has been severed. That’s part of song building."

You know how Doctor Frankenstein created his "monster", right? It wasn't the "cleanest" method. It was actually pretty gross and weird and creepy.

Well, with songs it sometimes works the same way.

You take a piece of an uncompleted song and you tie it to the piece of another one. Then you add some more stuff here and there and you suddenly have a new, finished song.

It may sound amateurish, but it is not.

There's really nothing wrong with this method. Actually, that's one of the reasons why it is a great idea to keep an archive of all your old experiments, no matter how cringy they are.

The point is: you can always go back to an old song, one you thought impossible to complete and give it a new life.

Tip #3: You don't always know when a song is finished

Tip #2 might have confused you. How can you tell whether using the Frankenstein approach has actually transformed three unfinished songs into a good, finished one?

Well, the answer is that you never know. In the words of Tom Waits: "You don’t always know when a song is finished and I’m not sure if a song is ever finished, to be honest with you. You know, they’re constantly evolving."

At some point, you have to give a song a proper conclusion. You have to record it and, in order to do that, you must be happy with the result you have in your hands.

However, when a song is done and recorded it doesn't necessarily mean it is finished.

A lot of artists often get back to their old songs to change something, re-record them with a new spirit, or give them an alternate ending.

It probably happened to you too. You have written and recorded a bunch of songs. Maybe you have published them. And then, a couple of years later, you listen to them again, just to find out you hate them now.

As Tom Waits says: the songs constantly evolve. And you evolve too. The artist you were two years ago is not the artist you are now. So, it is probably better to see our creation with this flexible approach. Of course, we record the songs we consider finished at that particular time, but nothing stops us from getting back to them and change what we think needs changing.

Will this process ever end? Probably not.

Tip #4: Don't forget about the sailors

Tom Waits says: "I think all songs should have weather in them, names of towns and streets, and they should have a couple of sailors. I think those are just song prerequisites."

Now, you don't actually have to add sailors to your songs, but the point here is: tell a good story.

As I said in the introduction, Tom Waits is great at storytelling and that's why: he's not afraid of adding details, no matter how small and meaningless they seem to be.

But it's so hard to dance that way/when it's cold and there's no music. These couple of lines always get me because they are simple, straight to the point, and they could be taken from a novel, a poem, a movie script. Not necessarily a song.

They are actually taken from Hold On, one of Tom Waits' best songs, in my opinion. Apparently, these words were inspired by a scene going on outside a bus Tom was riding with his daughter. At the bus stop, they saw a girl sort of dancing in the street, maybe trying to warm herself up, in that cold weather. Tom's daughter said something like "It must be hard to dance with no music on and in such cold weather," and that was it!

A tiny detail that tells a story in just a couple of sentences.

Tom Waits says: "You put yourself into some sort of trance to receive certain songs. You know, it’s like setting a trap for a song. It’s like fishing or anything else. You have to be real quiet to catch the big ones."

This quote reminds me of another artist I really love: David Lynch.

David Lynch talks a lot about fishing when he explains his creative process.

It means there is always a certain degree of randomness when you are creating. You have to put yourself into the right mental state to access the mystery, have the right inspiration.

Tom Waits has often explained that he tries not to write at the piano anymore. Using an instrument, according to him, could actually push you towards directions you have already taken. Thus, getting you on the "safe" road, rather than on the interesting, more creative one.

Now, I'm not saying we should all give up composing music in a "classical" way, sitting down with your instrument, with pen and paper. That's actually what I do all the time. All I'm saying is that we should always try to let go of our willingness to be in charge.

By losing a bit of control, we might open the door to that receptive mental state that allows us to go on a successful fishing trip.

It is easier said than done, I know. But, after all, songwriting is a game. What's more fun than trying a new approach?