Love them or hate them, Nirvana was one of the most influential bands of the 90s.

With his enigmatic songwriting style and suffered lyrics, bandleader Kurt Cobain inspired a whole generation and more, becoming a true rock icon that still impacts musicians and music lovers around the globe.

Kurt Cobain still has a lot to teach to young songwriters, especially the ones who feel they can't fit in the mainstream world or the traditional approach to writing.

On the other hand, many musicians argue that Kurt Cobain was not so great after all. Since he didn't follow the rules and chose a very personal songwriting method instead, they feel he should not be followed as a good example.

My view, however, is quite different.

Of course, Kurt didn't write following the rules of music theory. He wrote pretty enigmatic and incoherent lyrics that he couldn't really explain either. He used his guitar in quite a peculiar way too, but all of this doesn't make his songs any less interesting, influential, and relatable.

We could criticize the technical aspect of Kurt Cobain's songwriting (although, in doing so, we should probably apply the same strict meter to a lot of other rock icons too), but we cannot deny how generations of young people related to those songs in quite a strong, almost visceral way.

Kurt Cobain's songs influenced my adolescence too. I would dare to say that Nirvana's albums are a sort of rite of passage for some people. Teenagers who dig rock music and who feel somehow "out of place" often find a comforting home in those peculiar guitar riffs and enigmatic lyrics.

This is why I think it is worth studying Kurt's songwriting style and finding some inspiring tips in his work. 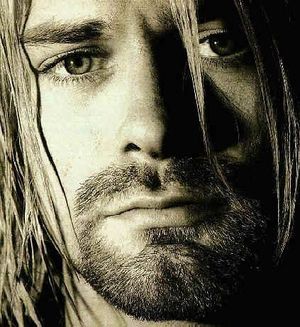 Kurt Cobain, source: Flickr - used under the CC BY 2.0 license

Tip #1: The meaning is meaningless

In an interview with Rolling Stone, Krist Novoselic recalled how Kurt would come up with new songs.

The bass player also pointed out how his buddy was not interested in finding a meaning to his lyrics.

I think this is one of the reasons why Cobain's songs are so appreciated by young people. You can basically interpret them as you want, and let the imagination guide you in the process.

However, writing enigmatic lyrics that leave a lot of room for different interpretations can be a double-edged sword.

In the traditional songwriting approach, we are taught to write on-point lyrics. We are free to use metaphors and take poetic licenses, but without getting too abstract. This should make our song more relatable and easier to be followed by our listeners.

On the other hand, the free approach Cobain would use can lead you towards interesting solutions and ideas you wouldn't have otherwise.

Whether you choose to write enigmatic, almost non-sense lyrics or not depends on you and your goals. You probably won't write a huge commercial hit following the steps of Kurt Cobain (although, who knows? Songwriting is not an exact science!). However, with that approach, you could experiment with a lot of new ideas and take your songwriting to the next level.

Remember you don't have to publish every song you write. If what you came up to feels too weird or inexplicable, you can always discard it. But rest assured: writing a new song is always a great exercise, whether you are going to release it or not.

One of the most important steps in Kurt's songwriting method has nothing to do with songwriting.

Cobain kept journals where he would write poetry and random words. He would also sketch and jot down anything that came to mind. He would later use this material for his song lyrics.

Journaling is surely a great activity, whether you want to try Nirvana's songwriting style or not. We can get tons of ideas for our songs from the simple act of freely jotting down what comes to our minds.

If you develop this habit, you can basically count on an archive of song ideas for when the inspiration seems to be dead.

If you want to try Kurt's method, you can employ a sort of cut-up technique and use bits and pieces from your journals for your song lyrics.

Kurt Cobain was inspired by writer William Burroughs in the use of this method. David Bowie used this technique too. It can make a huge difference when you feel the lyrics to your next song are just not coming up as smoothly as you would like to.

Although we usually praise him for his lyrics, Kurt Cobain was quite good at coming up with interesting melodies too.

When writing a new song, before using his journals to find the right words, Cobain would improvise a melody over the guitar riff he had found.

The ability to improvise a melody over a certain chord progression or riff is very important for songwriters. First of all, it saves us a lot of time during the songwriting process. Secondly, it helps us be more personal in our approach.

The best way to develop this ability is to practice. Whether you're a singer or an instrumentalist, make sure to reserve a few minutes a day to practice your improv skills.

Tip #4: Develop your aesthetic and personal sense of humor

If you think about Nirvana songs, chances are you will picture a specific aesthetic connected to them.

As Novoselic explained in the same interview quoted above, Kurt Cobain had a personal and quite specific aesthetic that he explored through his journals, not just through his music.

He would often juxtapose pure, bright, positive ideas to rotten, dark, negative elements, and vice-versa. This approach often resulted in quite a unique sense of humor through which Kurt often described his suffering, his demons, or the aspects of society he couldn't stand.

It is very important to find your own aesthetic as an artist. Frankly, this is often what makes a true artist.

I personally think that particular aesthetic is what makes Cobain's songwriting so interesting and worth studying.

It doesn't matter if your songwriting approach is very far from the traditional one. It doesn't matter if you cannot fit into any mainstream category or if you feel like an outsider all the time. By building your own voice, your own aesthetic, you can communicate your views in a clear way, even if your writing is erratic and incoherent. That aesthetic is what unifies it all.

Chances are you will also find an audience who can relate to that view, building a strong bond between you and your listeners.

Tip #5: Find your own approach to the guitar (or your instrument)

Let's face it: Kurt Cobain was not the best guitarist around. His approach to the instrument, however, was quite personal and unique, making it a sort of trademark for the band's sound.

He would often use chromatic notes in his riffs (such as in Come As You Are), or dropped tunings (as in All Apologies). His favorite chords were power chords, but he would also play simple, yet effective guitar solos that often resembled the main theme in the song.

Once again, we can find a specific aesthetic not only in Cobain's lyrics but in his approach to the guitar too.

What can we learn from this?

As songwriters, we can and should explore our instruments, finding our own trademark sound and performing style.

Find your own voice, your personal touch on your guitar or preferred instrument and your songwriting will also evolve.

Let me know in the comments your take on this matter and don't forget to check out my other songwriting articles if you need further help with your songs.